Only a fortnight after they opened the doors to their new café in the Otago town of Middlemarch, a major disaster struck. Tap & Dough Bistro proprietors, Norma and Richard Emerson, watched in disbelief as heavy rains arrived, deluging the region and leading to heavy flooding. The storm brought both rainwater and raw sewage inside the Tap & Dough building; a building which had just received an interior fit-out worth more than $150,000. 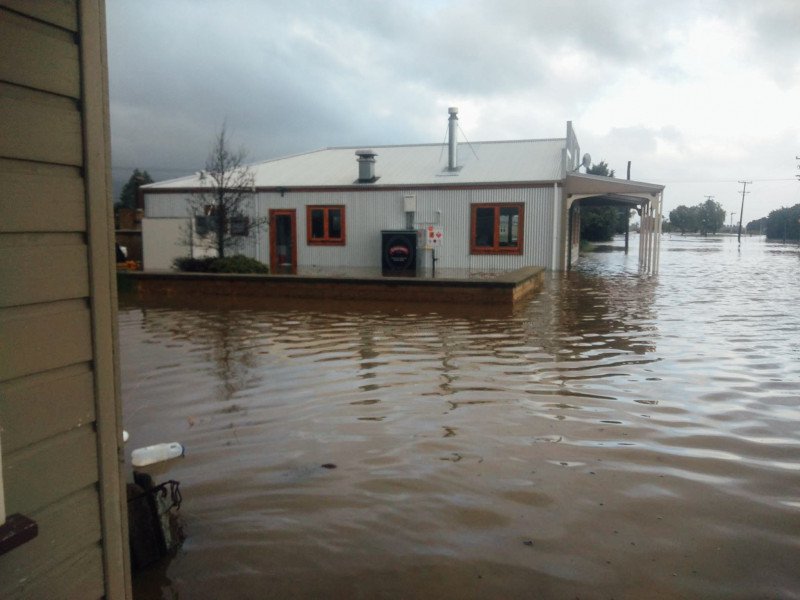 Norma and Richard had obtained the vacant commercial property on the corner of Mould Street and Snow Avenue in Middlemarch to create an alternative eating establishment to the local pub for residents, tourists, and the steady stream of keen cyclists exploring the popular Otago Rail Trail.

Despite their best efforts to sandbag the premises, and the local fire brigade volunteers pumping out the water and sewage from inside the building, the Tap & Dough was contaminated meaning refrigerators, carpets and wood panelling would all need to be removed by specialist contractors.

“We spent a lot of money on the place, refurbishing everything and putting in new equipment,” says Norma.

“When we came in the day after the flood waters had subsided, we realised that everything was contaminated by the sewage.

Because all our fridges and freezers have their motors located in the bottom of the units, they were ruined.

“But I have to say that the insurance was there for us,” she says.

Norma says she was a nervous wreck when she first called her broker Charlotte Couch from the Crombie Lockwood Dunedin branch. Norma says that Charlotte drove up immediately from Dunedin to Middlemarch to reassure them all was in hand.

Charlotte looks after SME and rural clients and says the Middlemarch flooding was “pretty shocking” for all the town’s residents and business owners.

“It was frightening because the rain was just relentless. This was an act of God, leaving us helpless because we couldn’t control or remove the water and the sandbags were pointless,” she says.

A Middlemarch resident herself, Charlotte arrived at the Tap & Dough the day after the flood subsided to help the Emersons clear out the mess and to start the claims process.

“Quantifying business interruption is quite difficult for a loss adjuster when the business has only been trading for a week and half,” says Charlotte.

“Fortunately, the Emersons had the benefit of a blanket business cover, which means they were well protected from being underinsured.”

“I was just really surprised by the proactive response,” says Norma. “I’m very happy about the service provided by Crombie Lockwood.”