It’s a big job saving a species, and one that couldn’t be done without the support of volunteers. Through our partnership with Kiwis for kiwi, we’ve seen first-hand the difference everyday Kiwis make. This National Volunteer Week we meet some of the people giving their time to help kiwi. 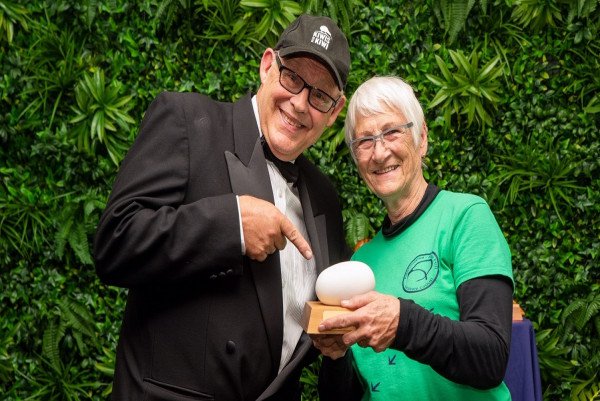 Marj has been involved with kiwi conservation as Secretary of the Mahinepua Radar Hill Landcare Group since 2002. While there’s a lot of fieldwork in kiwi conservation, the paperwork that comes with it is just as important. Marj has got that covered, keeping on top of administration, management agreements, permits, funding applications, health and safety requirements and more.

What motivates you to volunteer?

Originally it was the chance to learn about the flora and fauna in the area. And this became a fascination with kiwi and all the other creatures which inhabit this rather unique area.

This hasn’t changed - and has broadened to me wanting to help the people of the Far North appreciate that they live in an area where they have our national icon in their backyards, and the rest of NZ do not!  Also I'm motivated to find out how we all can spread the word and assist the endangered fauna that is special to this region.

What’s the most challenging aspect?

Funding. Without the funds to hire a contract trapper, our 1200ha of land which comprises of uninhabited rugged terrain in native bush, farmland, coastal areas with holiday homes and part time residents, large forestry operations and lifestyle blocks, would not be able to stem the tide of introduced predators who love this area as much as we do. And having to source funding brings plenty of paperwork with it to secure the necessary permits.

Being out in the middle of the night waiting for a male kiwi to leave his nest so that we could remove his two eggs before loggers moved in to clear the area. When the male kiwi went out to feed, we dug our way to the eggs, to find they had both hatched and were old enough to survive without incubation. Finding chicks and carrying them to safety was amazing. The feeling of holding them is hard to describe, but having saved not only the chicks, but also the kiwi who would have stayed with the nest as long as there were eggs there, is a lasting satisfaction.

Also accompanying our kiwi locator and her dog on various ‘kiwi hunts’ is an experience that makes you feel very alive. Sitting on the ground in the sometimes wet and cold, but always beautiful native bush, holding a kiwi while it has its health check or scrambling up and down bush clad gullies following an amazingly trained dog leaves me feeling exhilarated and amazed at the beauty and diversity of our area.

For more information on the work to save kiwi visit kiwisforkiwi.org

Save our Kaweka Kiwi Project