Home > News > Forging ahead in Whanganui

Forging ahead in Whanganui

Whanganui-based Crombie Lockwood broker, Andrew Solesbury, has already chalked up a fair amount of time and experience in the insurance industry despite still being in his 20s.

“I’ve basically been in insurance since I left school. My parents back in the UK saw it as a solid industry and backed me one hundred percent when I announced I wanted to start out in it,” says Andrew.

“I began training in a claims team and that was a role I stuck with right through an eventual move to Australia, where I lived for a year, and on to New Zealand. I arrived here in May 2012, so I’ve now been in the local industry for seven years.”

Andrew initially lived and worked in Auckland but it wasn’t long before the potential of the provinces struck a chord with him. He moved to Whanganui and, for the first three years, commuted an hour each way to work in Palmerston North every day.

“I’ve been a strong advocate for Whanganui ever since I moved here. I really feel like it’s an absolute undiscovered gem in New Zealand.

“House prices have risen by around 20 percent, but a good home remains very much attainable, even for first home buyers. It's a great lifestyle that allows people to get out and about without all those big city headaches, and Whanganui is a great place to live and work.” 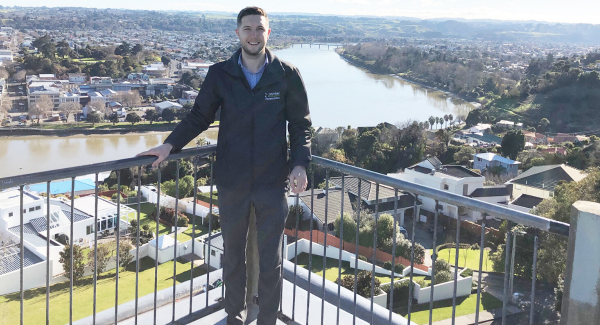 With many years’ experience in a claims team environment, Andrew recently decided to become a broker.

“I think after 11 years in claims I just wanted a change; I wanted a new challenge,” he says.

“Broking is a completely different ballgame. It meant I had to switch my mindset around to assisting the client with expertise in a different way. But having had experience on the claims side of things is definitely a positive I’ve brought to broking. When consulting with a client, it’s good to be able to relate how a specific product will work, having seen it in action at the other end.”

Andrew's client base is primarily commercial, and he sees the wider Whanganui business community as being very switched on.

“Business in general has changed so much everywhere. There are still many traditional retail and service businesses of course, but the internet and flexible working hours have really changed who our corporate clients are and what they can achieve locally, nationally and internationally, even from here in Whanganui.

“But one thing that hasn’t changed is the nature of doing business in a smaller community; bad news travels fast, so you have to offer a competitive service and make sure you’re there for your clients.

“It’s important to work for a company that is well-respected and it’s also important to protect your reputation too. I think I’m very lucky to be working for Crombie Lockwood here in Whanganui.”

When the world comes to Taranaki

For more than 12 years, Crombie Lockwood Tauranga staff members have been involved in all types of voluntary work to support the operation of the Waipuna Hospice.

Working as an insurance broker you make personal and professional contributions to the communities you serve. The rewards are numerous.

Young kiwi "Whakaora'' has the honour of being the 200th chick to hatch at the Crombie Lockwood Kiwi Burrow since the facility first opened.