New Zealand’s award-winning Pic’s Peanut Butter has amassed a following that some put down to its humble Nelson-born beginnings. Nurtured by a supporting rural community, it’s now a pantry staple across the country and beyond.

It’s the spread that makes everything taste better: peanut butter. And for New Zealand, Pic’s Peanut Butter is synonymous with quality produce.

“I started making peanut butter about 12 years ago when I had a little laundromat and I had to close it because the lease expired,” he says.

Despite having a long list of businesses in the past, including a charter boat company and more recently a sailing school, to make up the extra cash Pic turned to his then at-home hobby in 2007.

“I was making peanut butter for myself and my son at the time. I thought I could make some and sell it at the Nelson market on Friday afternoons.

“When people started coming back the next week and buying another jar because they’d eaten it all, I thought it was quite a good thing to be making.” 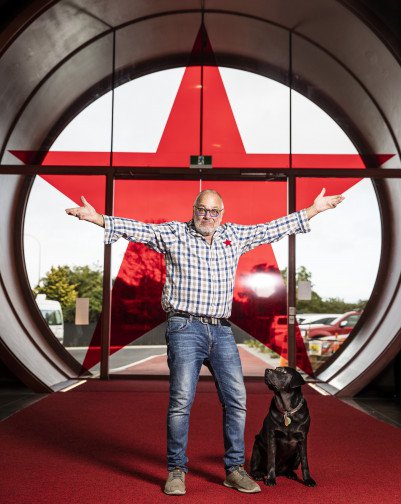 Bruce Picot, better known as Pic, was 55 when he turned a hobby into a business.

Pic’s adopted home of Nelson, where he’s lived for over 25 years, has played a big part in this provincial brand’s success.

“We have had such great community support, and anything we do for the Nelson community gets noticed,” Pic says.

Our early adopters are “intensely proud” of their local spread, and it’s on their recommendation it grew the way it did.

“To my mind, that word of mouth recommendation is so much more powerful than any fancy-pants sales guy or advertising campaign,” he says. “You listen to your friends; you listen to people who say, ‘yeah that’s good peanut butter, buy it.’”

“We have incredibly loyal customers,” he says. “That’s why we set up Peanut Butter World down here to give people who love what we do somewhere to come and where we can thank them for supporting us.”

And when it comes to local support, Pic says Crombie Lockwood Nelson has been his backstop since he entered the peanut butter game.

“We had a flood very early on in the piece, in our second factory,” he says. “We had huge rains; we had about an inch of water through the factory and that all got sorted out.”

Pic’s goes through 3000 tonnes of peanuts a year. “We’re making 16 to 17,000 jars a day,” he says. “We’re sold in about a dozen different countries, and a little over half of our production will be exported this year. It’s a lot of peanut butter.”

Pic’s stands out for its flavour, which he puts down to squashing the still-warm, freshly roasted peanuts primarily sourced from inland Brisbane and the Atherton Tablelands south-west of Cairns, Queensland.

Being a natural product, peanuts taste different all around the world, much like coffee.

“You may not see it for a few months yet but there will be varietal peanut butters made with single-origin peanuts,” Pic says of an upcoming range that he’s adding to his suite of nut butters, oil, jelly and sachets (aka ‘slugs’).

“Peanut butter is just so easy to eat; it keeps well, it’s protein, it’s a very healthy food and tastes good,” he says of his five-star, Health Star Rating. “I can’t think of anything I’d rather be selling people.”

While the business grows from strength to strength, there are challenges for both the brand and the face behind it.

“I’m legally blind – I can’t read, I can’t drive,” he says of his macular degeneration. “But it has had significant benefits in that it has forced me to delegate and trust people to get on with the job.”

“As [the business] gets bigger, things take longer and longer to do. Stuff that you’d do in a week suddenly takes six months,” he says. “It takes a hell of a long time to turn the ship just a little bit when it’s this big.”

Back when it all started in his garage with a stainless-steel concrete mixer turned roaster, he was nearing retirement. “Retirement is a long way off now,” he says.

So, what’s next for the peanut butter giant? He will be opening a charitable trust to provide start-ups with small test kitchens where they can try out their unique foodie ideas, thanks to funding from The Provincial Growth Fund. They’ll provide all the equipment to develop their product to take to market.

It would have been really useful for me when I started out to have people around that could have helped like this," Pic says.

Passionate about protecting schools in the Bay of Plenty

Staff wellbeing is crucial to a business's ability to operate. Increasingly, companies are offering life and health cover as a way to look after employees.

Crombie Lockwood today announced that they will continue their partnership with Save the Kiwi with the aim to further boost kiwi conservation efforts.