Rethinking risk in a changing climate

Climate change is expected to not only alter the shape and nature of New Zealand’s urban development during the years ahead, it is also poised to herald a completely new landscape for both insurers and their clients.

Crombie Lockwood Bay of Plenty Branch Director, Brett Down, says that the ongoing effects of climate change look set to bring about perhaps the biggest shift in policy coverage the New Zealand insurance industry has ever seen.

Notably, a shift to risk based pricing – where policy holders within areas more susceptible to the effects of climate change will be required to pay for risks likely to be incurred – looks set to become the new normal for many seeking to insure property.

Brett recently presented an overview of the country’s changing insurance environment at a Property Council New Zealand meeting in his home district of Tauranga.

Brett believes the message – built around scientific data provided in part by leading environmental engineering consultancy, Tonkin + Taylor – is one that the entire country should be paying attention to.

The reality for New Zealand, says Brett, is that our relatively narrow island landmasses (two-thirds of New Zealanders live in what are regarded as flood prone areas) could feel the effects of climate change more acutely than many other nations. 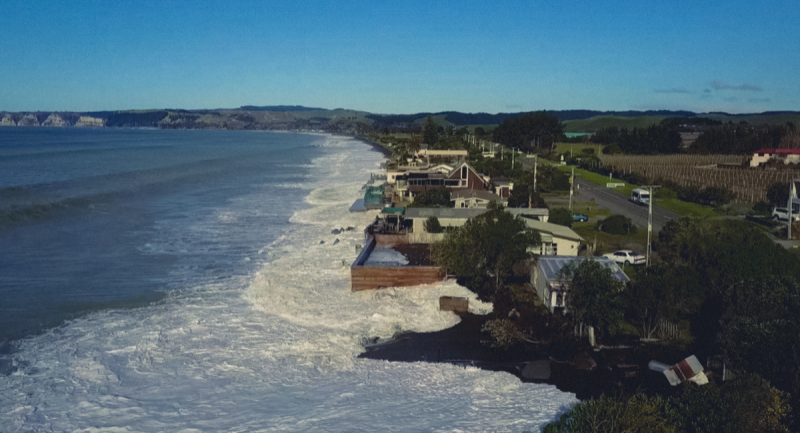 In March 2015 properties along the foreshore at Haumoana were engulfed by the tide.

“For generations Kiwis have valued the ownership of coastal property” he says. “But with current scientific modelling predicting a rise in sea levels of between 50cm and 100cm this century, the ability for many properties to get adequate insurance cover could become much more complex.”

New Zealand can expect to face, on average, annual costs of $1.6 billion (just under one percent of its GDP) stemming from natural disasters, based on data going back to 1900.

The numbers are startling. But in tandem with the realities of a changing global climate, Brett highlights the positive, suggesting that property owners and investors are now well positioned to make educated decisions based on hard data.

“While we have seen recent devastating weather events create big challenges for property owners and insurers alike, on the whole awareness is getting better. We have seen and will continue to see more diversifying of investment portfolios as a result.

“Also, while there is no single fix to the scenario facing us, there is more preparedness at local and central government levels and more analysis of potential risk areas.

I also believe more research is being done by developers prior to new blocks of land being opened up to the market,” says Brett.

It is believed that these factors will help shape the development of urban centres throughout the country over the next few decades, along with what types of brown and green field areas might become ripe for development.

Brett says there is also the potential for beach or riverside settlements and suburbs once deemed desirable to be overtaken by other areas in terms of growth.

“Haumoana out on the east coast of Hastings proved to be an unfortunate example of this. In March 2015 when ex-Tropical Cyclone Pam battered Hawke’s Bay, a large swell coupled with high tides saw properties along the foreshore at Haumoana – a popular up-and-coming area at that time – completely swamped. We’ve seen similar scenarios in Bay of Plenty and Otago in recent years.

“Risk based pricing will mean some properties in zones where weather events of this nature could have a significant impact may become more difficult to insure in future,” says Brett.

What has surprised many in this country though, is that risk based pricing is not a new advent. In fact, says Brett, New Zealand has actually been relatively slow on the uptake when measured against other countries.

Wildfires in California and south-eastern Australia and cyclone activity in Australia’s tropical north have all resulted in more pressure for a risk based pricing structure. This supersedes the traditional pooling structure, where costs associated with risk are shared across a wider group.

As with overseas markets, says Brett, without risk reduction, insurer capacity in New Zealand will continue to come under pressure. The net effect of both claim event frequency and capacity restrictions means pressure is placed on insurance premiums for both commercial and residential purchasers of insurance.

“The single biggest message the insurance industry needs to broadcast to its clients and stakeholders right now is, don’t bury your head in the sand on this topic,” he says.

“This will become the new normal and it is happening right now.”

Supporting Southland for a century

Fire Service Levies - the funding for New Zealand's 14,000 fire-fighters and the 62,000 callouts they answer each year – they’re set to rise. What’s the impact on you?