Helping to protect our native birds from predators

As an organisation, Crombie Lockwood is passionate about helping protect the iconic kiwi. Our partnership with Kiwis for kiwi saw the opening of the Crombie Lockwood Kiwi Burrow in October 2019, to incubate and hatch eggs from the wild for release into controlled, predator-free habitats.

Alongside the company’s efforts at a national level, Crombie Lockwood Taranaki Branch Manager, Aaron Hickson, wanted to do his part in keeping kiwi safe in his own province. He reached out to the Department of Conservation (DOC) to see what he could do, and traplines were the answer.

Picture of a pest trap

The traps catch rats, stoats, and weasels by luring them into the interior with the scent of a piece of bait (usually rabbit or goat meat). Curious predators are further enticed by the sight of a fake plastic egg.

“We have to maintain trap entrances to make sure the animals can get in by clearing cobwebs, because they don’t like those apparently,” says Aaron.

The team also record what they catch along with the specific trap number, giving DOC handy field data they can monitor.

“The idea is to get trapping going all over the country. I think everyone should give it a crack.” – Aaron Hickson

Aaron and his fellow trampers are assigned to a trapline that runs from the North Egmont Visitor Centre, up the Holly Hut Track to the Kokowai Track.

While the task started as an office initiative, the trapline terrain isn’t for everyone. It’s steep and requires a decent amount of physical strength, making it harder for the average volunteer to tackle. As a member of the Taranaki Alpine Club, and with ample experience tramping across the North Island, the terrain suits Aaron down to the ground.

“This particular trapline goes up past the razorback, and once you’re out of the bush line, you carry on around the mountain clearing traps every 50 odd metres,” he explains. “It gets to 1,344m above sea level at the highest point. The trip takes four hours depending on the weather; it could be a nice day, or it’s a blustering wind and bucketing down with rain.” 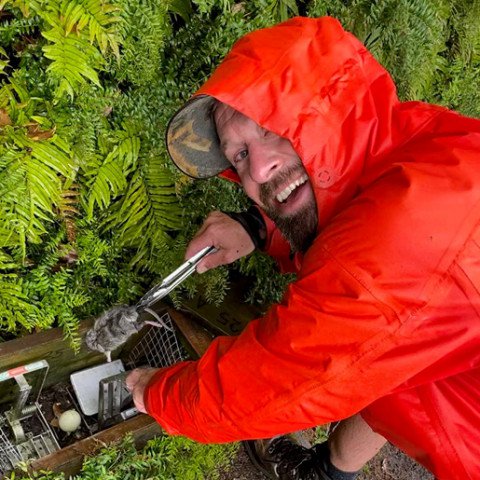 Everyone can help make a difference

“The work is a bit like fishing, in that you’re trying to get a catch. When you’ve had a decent haul, you get a sense of self-satisfaction; you’ve caught 20-odd rats that would have been out there killing native birds otherwise.”

Aaron says that no matter where people are based around New Zealand, Kiwis can do their part in helping protect native birds too.

“The idea is to get trapping going all over the country. I think everyone should give it a crack, whether they're volunteering to do traplines, or just taking the opportunity to have traps in their backyard via initiatives like Predator Free NZ.

"It's all going to help reduce the number of predators that are out there because they can do significant harm to our birdlife.”

Under the careful stewardship of Glen Riley, with support from the community, volunteers and partners, the future of the Sinclair Wetlands looks bright.

Showing our support for Sirocco the kakapo. At Crombie Lockwood we can arrange animal insurance for virtually any precious animal: even famous birds.