As part of Crombie Lockwood’s ongoing partnership with charity Save the Kiwi (formerly Kiwis for kiwi), a nationwide design a beeswax wrap competition helped school children get behind kiwi conservation.

The 'Design a beeswax wrap' competition gave Kiwi school kids the chance to see their winning creation turned into wraps for sale by Honeywrap. The initiative was launched during October's Save Kiwi week to raise some much-needed funds for charity Save the Kiwi.

“Save Kiwi week is dedicated to the awareness of the plight of the kiwi,” says Crombie Lockwood Sponsorship and Events Manager, Cam Maloney. “Kiwi numbers drop by two percent every year, and the goal of Save the Kiwi is to reverse that to a two percent increase.”

Hundreds of entries were received across the country but it came down to the winning creation featuring an apt pattern design, with a kiwi snacking on a worm.

“Monique (10) from Westbrook School in Rotorua was our winner,” says Cam. “She won 25 wraps of her design to share with family and friends, a whole class picnic, and the opportunity to name a kiwi chick hatched at the Crombie Lockwood Kiwi Burrow, which she decided to call Kimchi.”

“A lot of New Zealanders just don’t realise the plight of the kiwi, so talking to the kids and allowing them to create something as distinctive as the beeswax wraps really gets them involved,” says Helen. “They take that message home and talk to people, so the topic becomes much more widely known amongst the community.”

Helen awarded Monique a naming certificate at the picnic, provided some background to her work at the Crombie Lockwood Kiwi Burrow, and filled the kids in on Kimchi’s progress since the chick hatched on 13 October. 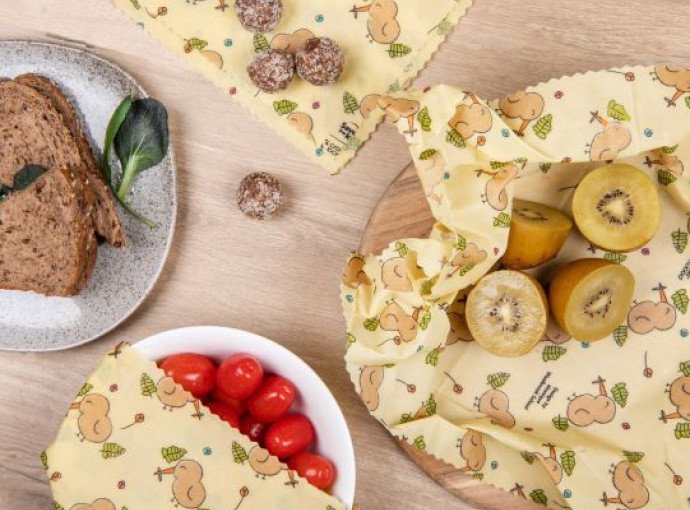 Buy a beeswax wrap to help save kiwi

Working with Save the Kiwi for three more years

Crombie Lockwood also took the celebratory opportunity to announce a three-year renewal of its partnership with Save the Kiwi, to continue the vital work at the Crombie Lockwood Kiwi Burrow, which was initially established in October 2019.

“Signing on for another three years of support just gives us that surety to plan into the future, to make sure that we can still carry out this essential work,” she says.

As part of Save the Kiwi week, the foundation also announced its new name on TVNZ’s Breakfast show, live from the Crombie Lockwood Kiwi Burrow.

“The rebrand from Kiwis for kiwi to Save the Kiwi better fits the goal and mission of the charity. We’re certainly very excited to continue our support,” says Cam Maloney.