Kiwi encounter of a lifetime for competition winner

We recently ran a competition for staff and a lucky client to win the opportunity to visit new-born kiwi chicks at the Crombie Lockwood Kiwi Burrow facility at Wairakei, near Taupō. Our Employee Benefits team manager, Alpa Bhandari shares her favourite aspects of the unique experience.

Few New Zealanders get to see our national bird up close. But thanks to a staff competition, Alpa and two other Crombie Lockwood team members enjoyed the incredibly rare opportunity to see kiwi hatching, making for a very memorable experience.

“I never win anything!” laughs Alpa, “So it was a real surprise to find out that I’d won. Seeing our national bird up close is so rare and special, and to know I might see one hatching was even more exciting. I knew it was going to be a great day.”

“As an employee, I got a great sense of pride seeing firsthand how Crombie Lockwood is helping maintain New Zealand’s biodiversity, through our support of Kiwis for kiwi” says Alpa. “In some ways it’s bittersweet, you realise the impact humans have made on the species by introduction of pests historically, but your appreciation also grows for how the species relies on human help right now.

"It’s satisfying to know your employer is taking its commitment so seriously. Getting the national kiwi population to flourish again is genuinely achievable because of the support a company like Crombie Lockwood can offer." 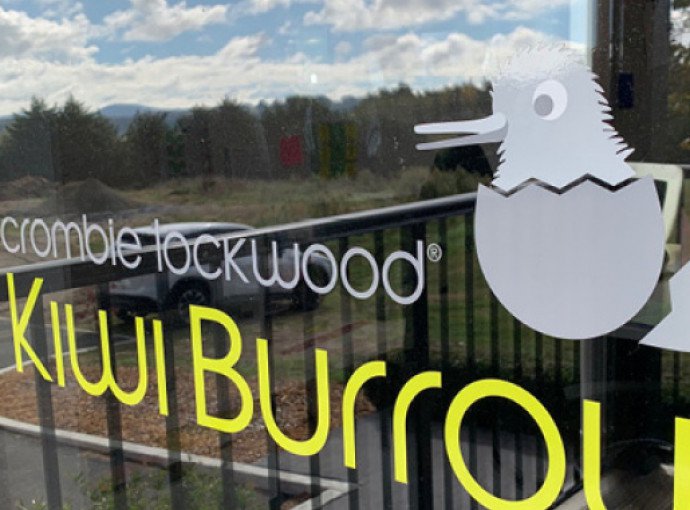 "It’s bittersweet. You realise the impact humans have made on the species by the introduction of pests, but your appreciation also grows for how the species relies on human help right now. It’s satisfying to know your employer is taking its commitment so seriously."

Proud to be part of a stronger kiwi future

Alpa describes the guided tour as being “…like an Alice in Wonderland experience”. With so few people being able to say they were there to see a kiwi egg hatch, the entire trip to Wairakei felt like an honour.

“We got a guided tour through the entire Crombie Lockwood Kiwi Burrow facility,” continues Alpa. “I learnt so much about our national bird: their diet, habitat and how the Kiwis for kiwi organisation is helping.

“We couldn’t go inside the hatchery area for risk of contamination, but I could see through the window a kiwi cracking through its egg. The eggs are quite large, which is something I wasn’t expecting. This little guy was struggling to free himself.”

With a little intervention from a hatchery team member, the kiwi chick was successfully freed from the shell.

“I was just like Wow! The kid in me was in awe,” concludes Alpa. “I feel very privileged to have this wonderful connection to our iconic kiwi. It is so important we give kiwi a chance to fight for existence, and we all can play a part. It was certainly an experience I’ll treasure forever.”

Giving clients a chance to interact with kiwi

Crombie Lockwood also ran a kiwi experience competition for clients. Our Christchurch-based client, Leanne from Hastie Chartered Accountants won the opportunity to visit the Kiwi Burrow and assist in the release of baby Miro at the Sanctuary Mountain Maungatautari.

Leanne gifted the experience to her son Scott and his wife, Sarah, who organised the trip as a birthday surprise for Scott.

Working together with Kiwis for kiwi

After hatching, the chicks are raised within a predator-free environment at the kiwi sanctuary within the grounds of the Wairakei Golf Course until they are strong enough to defend themselves against common predators such as ferrets and stoats. Since opening, the facility has hatched over 125 chicks and released more than 110 into predator-free kōhanga kiwi sites around the North Island.

Once a kiwi reaches a body weight of around 1kg, their survival rate in the wild is around 95%. They can live for up to around 50 years and actively reproduce throughout that lifespan. In conjunction with increased predator control, the long-term benefits of the Kiwi for kiwi programme for New Zealand’s national bird are significant.

Supporting Southland for a century

Celebrating 100 years of essential service in 2019, Presbyterian Support Southland continues to provide welfare for both young and old throughout the region.

SMARTpak is exclusive to Crombie Lockwood. It's a market-leading insurance solution for SMEs, covering more than 30,000 Kiwi businesses.

Crisis communication is not just for big businesses; all business owners can use it effectively. Resilience expert Lance Burdett of WAR International explains how best…