Possums beware: there’s a new trapper in town and Pete Morresey’s innovative pest control system has become a central component in the fight to preserve Taranaki’s flora and fauna.

Crombie Lockwood client, Pete Morresey’s innovative possum traps have caused a stir in Taranaki and are now playing a significant part in the fight to eradicate the pest from an 8,600-hectare area at Pukeiti, on the edge of Egmont National Park.

Pete’s trap system has become an integral part of the $47 million, government-funded Toward Predator-Free Taranaki programme, which aims to rid the region of invasive pests by 2050.

The traps form a ‘virtual barrier’ and are placed along six paths which are 100-metres apart through the bush. Spaced out in a set line around 10-metres apart, the traps themselves are food- and poison-free, relying on the possum’s innate curiosity to be triggered.

“Possums are the nosiest creatures around, so it’s not hard to get their attention,” says Pete.

“We simply have a white card above the trap which sparks the possum’s interest. The traps are maintenance free, so all we need to do once the system is established is come in and clear them.”

Another advantage is that the traps can still eventually be uplifted and installed elsewhere as pest populations shift. 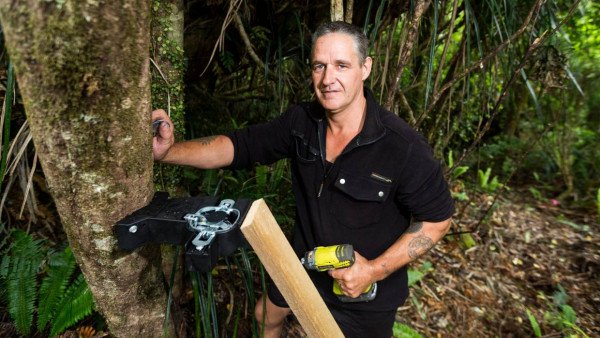 "I love the bush; it’s a fantastic environment to work in.” - Pete Morresey

While the trap system is simple in itself, installing them has been anything but. That involved some hard slog for Pete and an offsider, tramping into dense bush well off the beaten path to mount the traps.

“The weather can change in a second out in the bush, so I have to be prepared for everything. I take a full survival kit in, along with a EPIRB personal location beacon for emergencies.

And I have to take in all my materials too; a pack will hold 14 traps so there is a fair bit of weight to contend with.”

Even the prep work has presented challenges for the ex-diesel mechanic turned contract trapper. Clearing scrub for the virtual barrier lines has seen Pete cutting 16km of track in all weather conditions.

“We’re not high up on Mount Taranaki itself, so we’re not getting the big winds or anything. But you’re certainly well aware of your surroundings when the rain arrives,” he laughs.

In order to make the install easier, Pete and his offsider had to plot out their material needs, establishing points throughout the bush where gear could be left ahead of the main build.

The installation work has resulted in some big days; a 16-hour slog remains fresh in Pete’s memory as a particularly gruelling day.

“Yeah we walked out after sunset that day. But honestly, I wouldn’t change it for anything. I love the bush; it’s a fantastic environment to work in.”

Pete says he has already been approached by local councils in two other regions around the country to establish the virtual barrier system in possum-prone areas.

“I’m looking forward to helping other regions with pest control. It’s an issue which is ever-present right now, and one that affects a lot of New Zealand.

“It’s a great job to have and something that is definitely needed to protect our natural environment.”

Covid-19 means more Kiwis are looking to travel within New Zealand. Yet many are unaware that risks we consider when travelling overseas also apply here.

If materials or equipment fail to arrive on site, work can stop completely. Managing this scenario is a critical part of project risk management.